10 Health Benefits of Owning a Dog 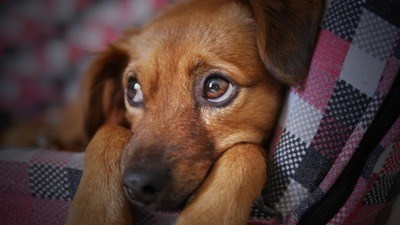 Dog owners have been shown to benefit in many ways from their pet’s presence in a number of different studies done by medical professionals.

As well as the obvious exercise related ones that come from having a companion that loves walking and running, there are many others that aren't so obvious. These include physical, emotional and mental well-being factors. In no particular order, here are 10 of them.

1. Fewer Visits to a Health Professional 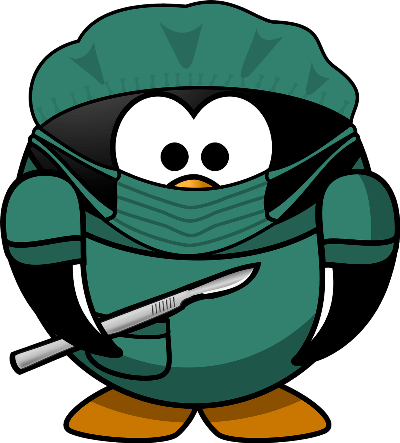 Studies conducted at Cambridge and UCLA have found that owning a pet corresponds to overall improved health and less need for hospital visits.

A Medicare study of its elderly patients also discovered that those who own dogs visit the doctor less than those who don’t have a pet.

If you’re over 65 and own a pet, odds are you seek medical help about 30 percent less often than people who don’t have a pet.

A study in the Journal of Personality and Social Psychology established that animal-owning seniors on Medicare “reported fewer doctor contacts over the 1-year period than respondents who did not own pets.” And while cats, birds, and other animals were helpful, “Owners of dogs, in particular, were insulated from the impact of stressful life events on physician utilization.” (Researcher-speak for "they didn't go the doctor without a good reason.") 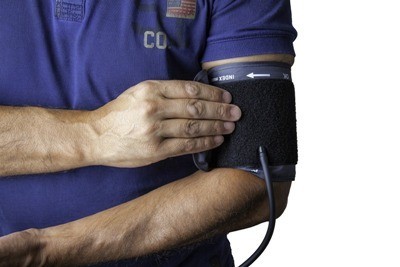 Dog owners have been proven to have blood pressure and cholesterol lower than ordinary people. These factors reduce the chance for cardiovascular diseases.

Stroking a pet has long been known to reduce blood pressure.

A study from the New York State University found that these benefits continue even without the pet available. The study tested a group of stockbrokers with hypertension. They concluded that just being a pet-owner can lower blood pressure.

What’s more, dog owners who do have heart attacks have better survival rates following the event. 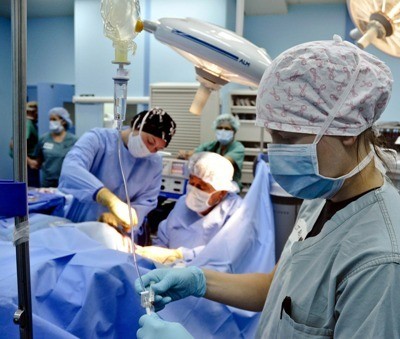 Hospital studies have found that seniors and recently operated on patients responded better to treatment and got better quickly while they were in contact with dogs and other therapy animals. Just petting a dog can be relaxing and therapeutic for recovering patients.
Also, dog owners have a greater chance to survive after suffering from a serious illness. Several studies have discovered that pet owners who suffered from a heart attack were more likely to be alive a year after they were discharged from the hospital than those who did not own pets. Another New York study found that pets affected their survival rate even more than the presence or company of family members or friends. 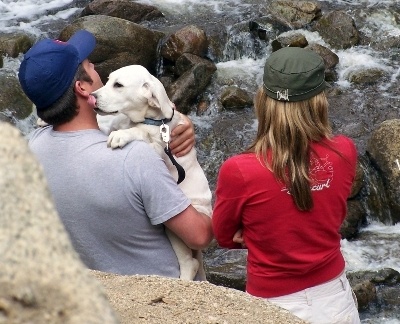 As we age, it becomes harder to get out and meet people.

Not so for dog owners.

Researchers have found that about 40 percent make friends more easily, possibly because the vast majority—4 in 5, according to one British study—speak with other dog owners during walks.

“Dog owners in particular tend to be a little more extroverted, or outgoing” says Joubert. “When you start to engage them about their companion animal, people tend to open up and really blossom. They want to share stories about their favorite friend.” 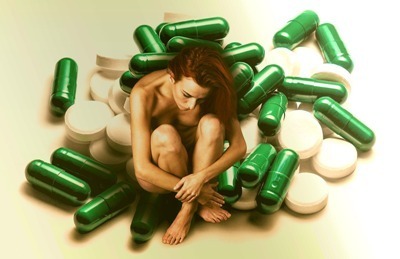 Patients who have dogs have also been known to have better emotional health than their counterparts.

Dogs offer unconditional love and affection. Their presence alone helps reduce loneliness for sick people who have otherwise been isolated.

Several studies of people with major illnesses have shown that the stress of fighting the disease was significantly reduced when they had a dog as company.

As we grow older—especially after we retire—it can be difficult to find structure and meaning day in and day out. Dogs take care of that. “They force people to continue to do things,” says Kristi Littrell, Adoption Manager at Best Friends Animal Society in Utah. “So, even if you’re not feeling well emotionally or physically, the dog doesn’t care. I mean, they care, but they still want you to feed them and take them for a walk.”

Dogs help prevent loneliness and isolation, as well, which is key in staving off cognitive decline and disease. “It helps us to not just focus on our needs,” says Joubert. “It gives us a reason to really get up in the morning. ‘I need to get up and take care of my friend here.’”

6. A Fitter and More Active Lifestyle 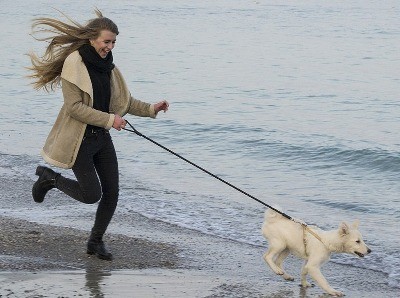 Health experts recommend that adults get about 2 hours and 30 minutes worth of moderate exercise per week.

Dog owners are way more likely to hit that goal. “People love to be outside to walk their dog, and be with their dog,” says Kay Joubert, Director Companion Animal Services at PAWS, a Washington-based animal advocacy organization. “It helps them be more active.”

In turn, that activity helps us remain mobile into our 70s and 80s. Earlier this year, a study in the journal Gerontologist found that older adults who walked dogs experienced “lower body mass index, fewer activities of daily living limitations, fewer doctor visits, and more frequent moderate and vigorous exercise.” 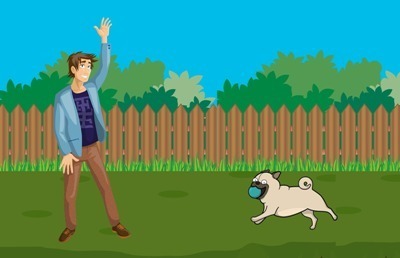 Obesity has become the number 1 concern of almost every Western society.

Dog owners have the most enjoyable way possible to help them lose weight.

Want to drop a few pounds? Grab Fido and get hoofing.

Research has repeatedly found that daily dog walks help you lose weight, since they force you to into moderate physical activity for 10, 20, and even 30 minutes at a time.

In fact, in 2010, one small study discovered public housing residents who walked “loaner” dogs five times a week lost an average of 14.4 pounds over the course of a year. The best part: Participants considered it a responsibility to the dog, rather than exercise. (”They need us to walk them.”) 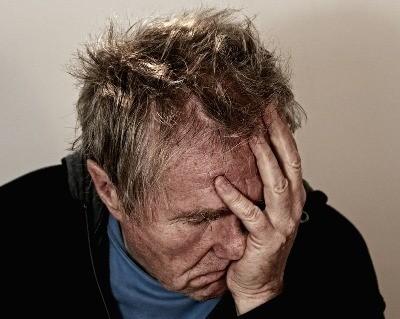 It’s widely believed that dog owners are less prone to depression than the dog-less, largely because they seem to help in so many other areas of health and wellbeing.

The truth may be somewhat more complicated.

Though there’s evidence that certain dog owners—including isolated elderly women and HIV-positive men—suffer less from depression than those without pets, there’s also proof that dogs don’t do much for other demographics.

That said, therapy dogs—animals that do not stay in your home—have been shown to be effective in easing depression for a variety of people, old and young, sick and healthy.

There’s a reason therapy dogs are so effective. Spending just a few minutes with a pet can lower anxiety and blood pressure, and increase levels of serotonin and dopamine, two neurochemicals that play big roles in calm and wellbeing.

People performing stressful tasks do better when there’s a dog around, too, and studies show dogs ease tension both at the office and between married couples. 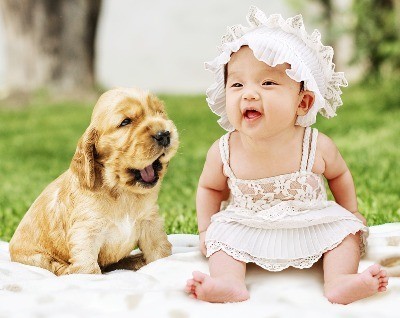 Back in the olden days (the ‘90s), experts believed having a dog in your home contributed to children’s allergies.

Fortunately, recent research shows just the opposite is true.

Dogs and cats actually lower a child’s chance of becoming allergic to pets—up to 33 percent, according to a 2004 study in the Journal of Allergy and Clinical Immunology.

As a side bonus, children might even develop stronger immune systems.

A Swedish study found the more pets in a household in early life, the less likely a child will go on to develop conditions like asthma, eczema and hay fever.
For instance, kids aged 7-9 years that shared a house with four pets when they were a baby were half as likely to have a recent allergy compared to their pet-free counterparts: 17 per cent compared to 33 per cent respectively.

10. Warding Off Disease and Injury 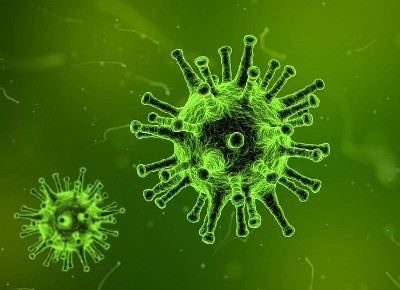 It’s believed that owning a dog can help detect, treat, and manage a variety of illnesses and debilitations.

Some dogs have been trained to sniff out skin, kidney, bladder, and prostate cancer, among others.

Service dogs are known to benefit people with everything from traumatic brain injury to autism to rheumatoid arthritis, increasing mobility and promoting independence.

Alzheimer’s patients are soothed by dogs, whose companionship also seems to mitigate emotional flare-ups and aggression. 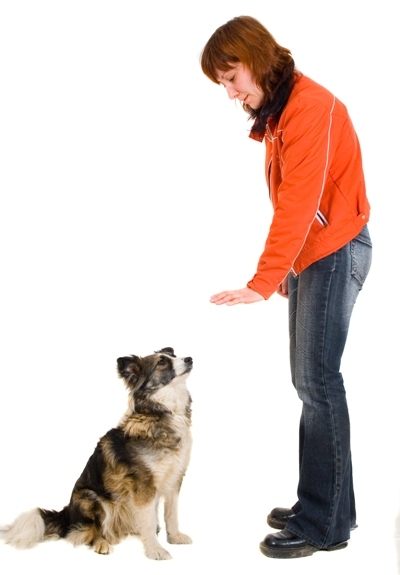 While clearly essential for working and service dogs, as well as companion dogs for the elderly, good training makes for a far better relationship for all dog owners.

You probably don't need your dog to jump through flaming hoops or even to roll over on command, but you probably do want:

All of these things can be taught to your dog in a way that is enjoyable for you both.

The result is not just a happier relationship, but a safer one too.