Now I have to admit that's not me.

It's a picture of Maggie, my beautiful Border Collie who passed away some years ago at the age of 14.

If she were still here, I'd get her to write her own About Me post. She was that smart.

There's a joke Border Collie owners like to tell:

There was this guy who went to visit his friend, who had a Border Collie. "Where's the dog, Joe?" he asked, looking around and not seeing him.

"Shopping," says his friend. "What do you mean? How does that work?"

"Well, I put the grocery list and some money in a shopping basket and he takes it round the shops. He knows which ones to go to and they put the stuff in the basket and the change back in the envelope. After he's done the rounds, he brings it all back here. Simple, really."

His friend isn't quite sure if Joe's pulling his leg, so he says nothing.

But sure enough, twenty minutes later, he sees the dog trotting up the pavement with the shopping basket in his mouth. He puts it down, stands up to unlatch the gate, brings the basket up the front path, puts it down again and stands up to ring the doorbell.

Now maybe Maggie wasn't quite up to doing the grocery shopping, but she was certainly a delight to train. She could be 100 meters away and if I clicked my tongue she would come racing back to me and sit at my feet with her "Yes, boss, what do you want me to do?" look.

But all dogs can be trained to do this.

You just have to now what you're doing. 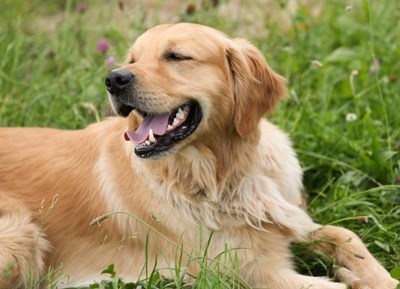 I had another dog at the same time as Maggie, but sadly he also has since passed away.

Toby was a Golden Retriever.

The thing about Goldies is that they don't have a mean bone in their body. Always happy, wagging their tails as they walk along for no apparent reason. And their retriever heritage means that co-operation is built into their DNA.

But they are pups until they're 3 or 4 years old. I used to joke that if Toby had half Maggie's brains, he'd be twice as smart!

But that was really unfair. As I said before, all dogs are trainable and Toby was a beautiful, obedient, lovable dog. He and Maggie were great mates. You just had to make sure you had his attention, and there are techniques for doing that.